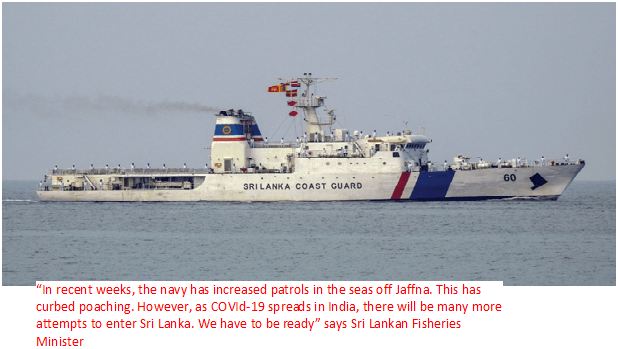 Minister Devananda said that the Sri Lankan Navy was currently doing a great job of protecting the country from Indian fishermen. However, the smugglers and human traffickers operating out of India had increased and thus he asked the Coast Guard to provide more assistance, he said.

The navy has increased patrols in the seas off Jaffna. This has curbed poaching

“In recent weeks, the navy has increased patrols in the seas off Jaffna. This has curbed poaching. However, as COVId-19 spreads in India, there will be many more attempts to enter Sri Lanka. We have to be ready.”

Meanwhile, Mannar health Officers quarantined a Jaffna businessman who had returned to Mannar from India in a local fishing vessel and two fishermen who operated the boat. The businessmen had paid the two men Rs. 100,000, the police said.

The businessman had legally travelled to India in April this year. However, he had not been able to return due to the COVID-19 pandemic in India. Thus, he had paid two fishermen from Pesalai to smuggle him out of India. The navy arrested the three men while they were returning to Mannar and handed them over to health officials.