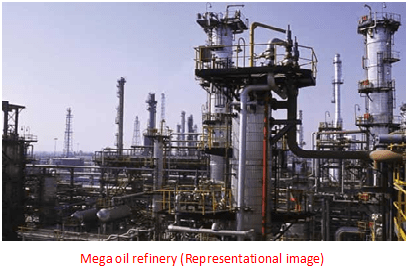 A Mega Petroleum refinery and a Petro chemical complex will come up at the South Andhra Pradesh Port town of Kakinada soon,it was officially announced here after the central and state govt officials had a round of talks in the national capital on June 16

A working group has been constituted under the Chairmanship of Joint Secretary (Refineries), Ministry of Petroleum and Natural Gas with the Government of Andhra Pradesh officials to conduct a feasibility study within six months for establishing a greenfield crude oil refinery and petrochemical complex at Kakinada in Andhra Pradesh

A delegation led by Andhra Pradesh Industries Minister Mekapati Gautham Reddy met with Union Petroleum Minister Dharmendra Pradhan in Delhi  requesting the Centre to expedite a feasibility study to set up a petrochemical complex in Kakinada.

This project was provided for in the AP Reorganisation Act, 2014

This project was provided for in the AP Reorganisation Act, 2014, which enabled the creation of Telangana State by carving out a portion of then unified Andhra Pradesh.

The Industries Minister and Aditya Nath Das, Chief Secretary and a State official delegation held a detailed discussion with the Union Minister and Tarun Kapoor, Secretary, Ministry of Petroleum and Natural Gas, on the issue of establishing a Petrochemical Cracker Complex in Andhra Pradesh by HPCL-GAIL consortium.

This development is in line with the provisions of Section 93(4) of AP Reorganisation Act, 2014, wherein it is provided that IOC or HPCL shall, within six months from the appointed day, examine the feasibility of establishing a greenfield crude oil refinery and petrochemical complex in Andhra Pradesh.

Accordingly, the feasibility for establishing 1 Million Metric tons per annum cracker complex at Kakinada with an investment of Rs.32,900 crore by the consortium HPCL-GAIL has been carried out and Andhra Pradesh government was to have supported in terms of Viability Gap Funding for the project.

However, with the Government reducing the Corporate Tax and interest rates coming down, the Cracker & Petroleum complex project would perhaps become viable without any viability gap funding to be provided by the Andhra Pradesh government

It was also decided to take an early decision with Engineers India Limited and SBI Caps advised to rework the financials in view of the changes in Corporate Tax and interest rates to take forward the project.

The state Chief Minister YS Jagan Mohan Reddy recently met with Pradhan and requested the support of GoI to take forward the project without the State’s Viability Gap Funding support. The Union Minister responded positively and promised to extend all support in taking forward the project.