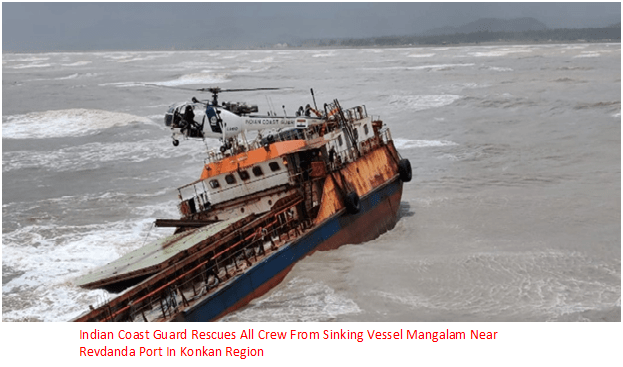 All the sixteen crew members of the merchant vessel MV Mangalam that went aground near Revdanda jetty in the Konkan coast of Maharastra were rescued in a daring rescue operation when the coastguards deployed boats and helicopters in the mission which lasted about an hour.

The Coastguards used one of its ships and two Chetak helicopters to rescue the crew members of MV Mangalam amidst inclement weather and very rough waters.

An official of the sinking ship had informed the Mumbai based Maritime Rescue coordination centre on July 17th morning saying that their vessel was sinking with 16 crew memberts on board about three kilometers from Redanda jetty in Raigarh district. The official also told the centre that water was entering the ship and the crew membes were frightened about the possiblity of the ship sinking any time.

The MRCC team which received the call asked the official not to panic and that the rescue mission will be set in motion by the coastguards very soon.

The coastguard ship Subhadra Kumari Chauhan sailed from Dighi harbour and proceeded towards the sinking vessel. Two Chetak helicopters were also launched from the ICG Air Station at Daman for evacuation of the crew from MV Mangalam.

The ICG ship reached the vessel at about 10:15 am and after assessing the situation lowered boats to rescue the crew amid very challenging weather, an ICG release read.

ICG helicopters reached the location at about the same time and began winching of the crew. The ICG search and rescue units (SRUs) rescued all the 16 crew members from the merchant vessel.

The crew members were later taken to Revdanda Port and provided medical aid.

The Coast Guard (ICG)  has rescued all the 16 crew members of a merchant vessel that went aground near Revdanda in Konkan coast off Maharashtra’s Raigarh district, in a well-coordinated air-sea operation. The fate of the vessel is however not known.