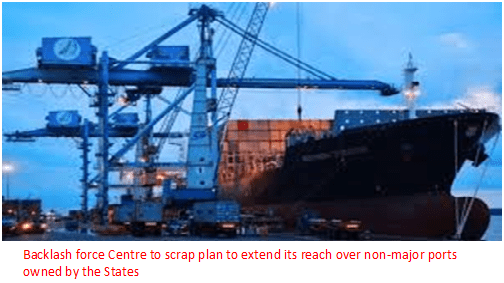 The Centre has scrapped plans to set up a Maritime Port Regulatory Authority in a new draft of the Indian Ports Bill that seeks to replace the Indian Ports Act 1908 after maritime States opposed the move that would have allowed the Centre to extend its jurisdiction over ports owned by the State governments.

The Maritime Port Regulatory Authority was designed to give sweeping powers to the Central government to “ef­fectively regulate and control ports” which are in the concurrent list of the Constitution and help realize the idea of a ‘One Nation, One Port’. “The proposal to set up a Maritime Port Regulatory Authority has been dropped to retain the federal structure enshrined in the Constitution,” a government of­ficial briefed on the plan said.

The maritime States argued that the move was “against the principle of cooperative federalism, legally untenable, discriminatory and ultra vires the Constitution” because ports are in the Concurrent list. The non-major ports are under the control of the State Governments and cannot be regulated by the Centre, they had said during stakeholder consultations on the Bill in January

The much-diluted new draft of the proposed law seeks to set up a Maritime State Development Council (MSDC) comprising representatives from the Central and State governments.

Such a Council is in existence for many years.

The Council shall make recommendations to the government for a more ef­ficient and conducive framework for ports in India, suggest measures to facilitate competition and promote ef­ficiency in the operation of ports and to facilitate growth of the port sector, among other issues.

It will be tasked with assessing the future development of existing ports and new ports, both major and non-major ports, by the Central Government or State Governments either directly or through private participation.

For the purpose of transparency, the Council may specify regulations for components of port tariff. The State Maritime Boards set up by the respective maritime States will oversee the functioning of non-major ports in their respective States.

The orders of the Tribunal can be challenged in the Supreme Court.