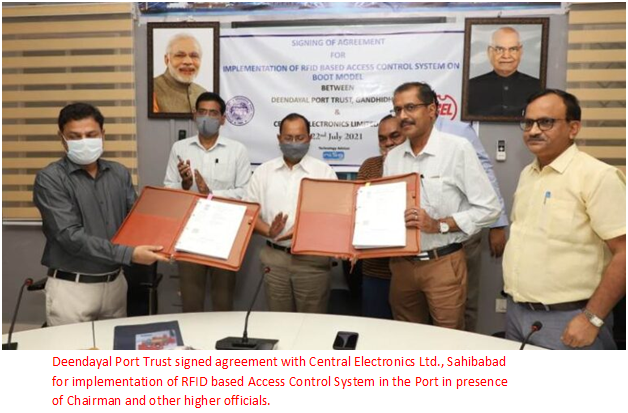 As part of Ease of Doing Business with the Port & Digital India Initiative, Deendayal Port Trust signed agreement with Central Electronics Ltd., Sahibabad for implementation of RFID based Access Control System in the Port in presence of Chairman, Dy. Chairman, Labour Trustee of DPT, Heads of Departments, CEL Officials, NISG, Hyderabad, Trade fraternity and members of the Press.

Central Electronics Limited is a Government of India Enterprise

Central Electronics Limited is a Government of India Enterprise under the Department of Scientific and Industrial Research (DSIR), Ministry of Science & Technology. It was established in 1974, with an objective to commercially exploit indigenous technologies developed by National Laboratories and R&D Institutions in the country. CEL has developed a number of products for the first time in the country through its own R&D efforts and in close association with the premier national & international laboratories including defence laboratories.

All automated Gates will Go-Live by December, 2021

First Gate automation is likely to be completed within three months and all automated Gates will Go-Live by December, 2021. DPTs RFID based access control system will enhance security, remove bottlenecks for seamless movement of traffic across port gates, ensure tracking & tracing of man, material, vehicle, equipment & other assets, and collection of revenue as per the notified rates. The RFID project will enable Geo-fencing of Port Infrastructure and Automate & speed up movement & activity within ports. Generate visibility of activities within and around port area. Control and limit access to authorized time & zones. Track every movement of man, material & vehicle across the port. Trace each movement and alert on anonymous pattern of activity. Record all movements of individuals, vehicle to create verifiable historical audit trial.